Human microbiome research is one most relevant the fields of innovation based on the large range of applications known and sectors currently or potentially involved. In fact, the US therapeutics market is meant to reach $6.9 billion by 2024, as per research conducted by IP Pragmatics. How will we get there? Microbiome research and innovation have arrived to stay.

“Until recently the gut microbes were viewed as harmless and of little benefit.  We now know that they play a major role in overall wellbeing. Alterations in the gut microbiota have been described in disorders as diverse as depression, diabetes, Parkinson’s disease and autism.  We also see dramatic changes in the microbiota in those who are overweight and obese”.

Microbiome technologies are expected to play a crucial role in the development of new drug discovery platforms and companion diagnostics in the precision medicine era. More personalised approaches in both diagnostics and therapeutics can be reached with enhanced understanding of human microbiomes. This amount of research on the human microbiome is leading to the discovery and development of novel microorganisms derived from our microbial symbionts and this tendency can be detected in the cumulated number of patents related to microbiome and cancer research within the microbiome space that can be extracted from consolidated multiple patent databases (Fankhauser et al, 2018).  Prof. Ted Dinan was asked during his conversation with Atlantia about the latest and more relevant microbiome research topics:

“As a psychiatrist I find the alterations described in the gut microbiota in patients with depression as very significant.  It raises novel therapeutic possibilities. There is for example increasing evidence that a Mediterranean diet, probably acting through the gut microbiota, can protect against the emergence of depression and also enable therapies for depression to work more effectively.  Psychiatrists and psychologists should give this nutritional advice to patients with depression.Psychobiotics are bacteria which when ingested can have a positive mental health benefit.  There are now a number of promising bacteria emerging which may be of value in treating anxiety and depression.  Further research is required”.

A recent report from Jefferies LLC estimated the number of Microbiome based-therapeutics trials in different medical fields. Gastrointestinal related trials are the health area with a major work done up to now, followed by immune/allergic, CNS and metabolic programs: 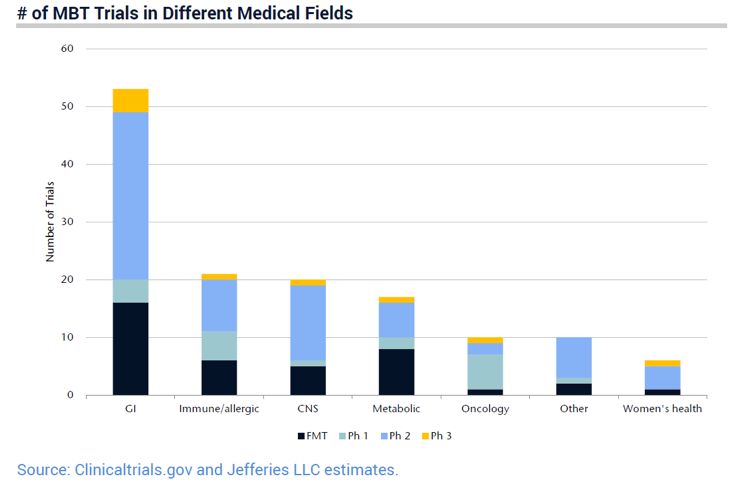 Among the possible approaches, the food industry can benefit from the microbiome research outcomes. Professor Dinan stated:

“Frailty in the elderly is associated with decreased microbial diversity. A major challenge for the food industry is to produce food that will increase microbial diversity and stave off frailty as people age.  Medical foods are also likely to emerge for other conditions such as depression and diabetes”.

Regulatory institutions such as EFSA and FDA require scientific evidence when associating a health claim to Microbiome based products, and the European Directorate for the Quality of Medicines (EDQM), play a major role in ensuring the quality of biotherapeutics, including biosimilars, thereby contributing to overall patient safety. The below graphic (O’Toole, 2017) summarizes the pathway to regulatory approval for LBP products:

The next 18 months seem to be crucial for the future of the industry: a recent study from Jefferies LLC highlights the importance of this immediate future, since approximately 150 clinical trials evaluating Microbiome-based Therapeutics are expected to close-out within this timeframe. This means that:

Prof. Ted Dinan was asked about his opinion on the state of the global microbiome research:

“With improved funding the global research perspective looks healthy.  We are fortunate in Ireland that Science Foundation Ireland has funded this field for a considerable period of time through APC Microbiome Ireland, based in Cork. There are other major research centres in Canada and the USA”.

In fact, is it believed that the results of the aforementioned trials, will determine the future level of investment. However, a future without microbiome research seems inconceivable at this point. Our interviewee remarked when asked his opinion about the future of the microbiome research:

“Within the next few years we will see several microbiome-based therapies emerge for a variety of diseases.

I think it is likely that as we move forward, the European Medicines Agency and the Food and Drug Administration will require that all drugs licenced be profiled for their impact on the gut microbiota, which in effect is a virtual organ.  If a drug damages this virtual organ it may not be licenced.”

Nevertheless, further scientific advancements would need to be made in this field to get to the utopic scenario drawn by the Professor. Given the simply vast amount of microbes/methods/combinations available for harnessing, Jefferies LLC rank the complexity of this approach as in line with other scientifically advanced therapies such as RNAi and gene/cell therapy, and we could see cycles of trial and error before the first approval. MBT’s have a long history of research; the first paper on FMT in Western medicine was published in 1958, and research still continues today with many programs in the clinic. In 2015, the first MBT company went public and raised over $190 million. Since then, the high-profile failure has forced many companies, to carefully design/redesign their clinical programs, similar to the reaction following clinical setbacks in other therapeutic approaches.

Atlantia asked a last question to prof. Dinan, if you would have to look forward 200 years’ time, how would you imagine the future of the food industry?

We will see, eventually, highly refined personalised nutrition regimes that will have a major role in disease prevention. Presently we are far from such a scenario– he stated. 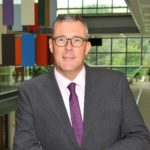 New live biotherapeutics will require regulatory and scientific innovation: The importance of a defined regulatory framework