Live biotherapeutic products (LBPs) are defined by the U.S. FDA as biological products that contain live organisms applicable to the prevention, treatment, or cure of a disease or condition (1). LBP therapies continue to attract attention as knowledge expands about the role of the microbiome in disease. However, LBPs pose a unique challenge in that they need to be stored under conditions appropriate for a drug (preferably room temperature) but are live organisms that typically only grow under the specific conditions where they are natively found. For this reason, most LBPs are lyophilized and then reconstituted following in vivo delivery to the target site of interest, where they recover in their optimal environment.

Cryopreservative formulations used for LBPs must not only be safe for oral consumption but must also prevent loss of viability during the particularly harsh freeze-drying process, allow for longterm potency under typical drug storage conditions, and, finally, support optimal growth recovery after administration. Leveraging experience working with many different anaerobic microorganisms over the past decade, Arranta Bio has developed proprietary cryopreservative blends that support superior viability, potency, stability, and growth recovery over current commercially available or commonly utilized solutions.

Cryopreservation: An Essential But Challenging Solution for LBPs

LBPs pose a unique Chemistry, Manufacturing,  and  Controls  (CMC)  challenge in that they need to be stored for longer durations under conditions preferable for pharmaceutical products, but are live organisms having a short, finite life span that grow only under the specific oxidative, pH, and often low-oxygen conditions of the organ where they are natively found. For this reason,  lyophilization   (or freeze-drying) is often used to extend the period of time when the microorganisms remain viable. During lyophilization,  the microorganism is frozen in a controlled manner and then placed under a vacuum and heated in a two-stage process to remove water and desiccate the cells. The desiccated microorganisms move to a state of suspended animation called anhydrobiosis.

Many microorganisms can survive for long periods of time in anhydrobiosis, stored under the proper conditions, and can be reconstituted without a significant impact to their growth and viability (2). Anhydrobiosis also facilitates storage at room temperature, avoiding the need for cold-chain storage, shipment, and handling.

While lyophilization helps extend the shelf life of LBPs, the process of freeze-drying itself can contribute to significant losses of viability associated with intracellular and/ or extracellular ice formation that can mechanically rupture cells, and/or are associated with the removal of water molecules that can lead to destabilization of cellular membranes (3). Cryopreservatives and lyo- protectants are often used during the lyophilization process as protectants against these events. Some cryopreservatives penetrate the cells and influence viscosity, osmolality, surface tension, and other properties required to maintain anhydrobiosis.

However, the cryopreservative/lyoprotectant formulation used to preserve viability during the freeze-drying process must also support long-term viability and potency of the LBP under typical long-term storage conditions, preferably room temperature, and they must be safe for oral consumption, further complicating the selection process. The formulations must protect the microorganism against storage environments for which they are not natively suited, including possible exposure to air or oxygen, moisture, different pH, and/or redox states. Formulation blends with an acceptable safety pro- file must be selected and tested in long-term stability studies to confirm that they can maintain acceptable viability and potency over time in their final format and package and in these environments.

Finally, the formulations must be able to support acceptable growth recovery after administration and delivery to the target organ/site of interest, which often have very specific nutrient, oxidative, pH, and oxygen conditions. Screening and identification of formulations must include evaluation of lag phase in one or more studies where the specific pH, redox, nutrient, and oxygen levels anticipated to be required for growth recovery are simulated to enable selection of one or more that can support optimal growth re- recovery after administration.

LBPs are newer as therapeutics but have been produced and lyophilized as probiotic foods and dietary supplements for many decades. However, formulations that maintain viability and stability have not traditionally been readily available. Developers of probiotics and dietary supplements compensate for this by “over-filling” capsules at a much higher number of colony-forming units (CFUs) than actually required in order to accommodate the expected losses during storage. For LBPs being developed under U.S. and EU regulatory guidances for pharmaceuticals, this approach is not appropriate, since the LBP must be manufactured in a well-controlled manner to ensure that specifications for critical quality attributes (CQAs), such as potency, are consistently and reproducibly achieved and maintained during storage. Significant losses of potency under storage conditions would likely be an unacceptable quality risk or result in an unacceptably short shelf-life.

Furthermore, probiotic or dietary supplement developers must scale up batch sizes and/or annual number of batches appropriately to yield the quantities required for “overfilling.” LBPs, however, must be manufactured in a cGMP facility, which can be significantly more expensive than for other product types. Cost of Goods (COGS) become very important, so maximizing potencies and yields to minimize batch size and annual number of batches becomes essential for a commercially viable LBP. 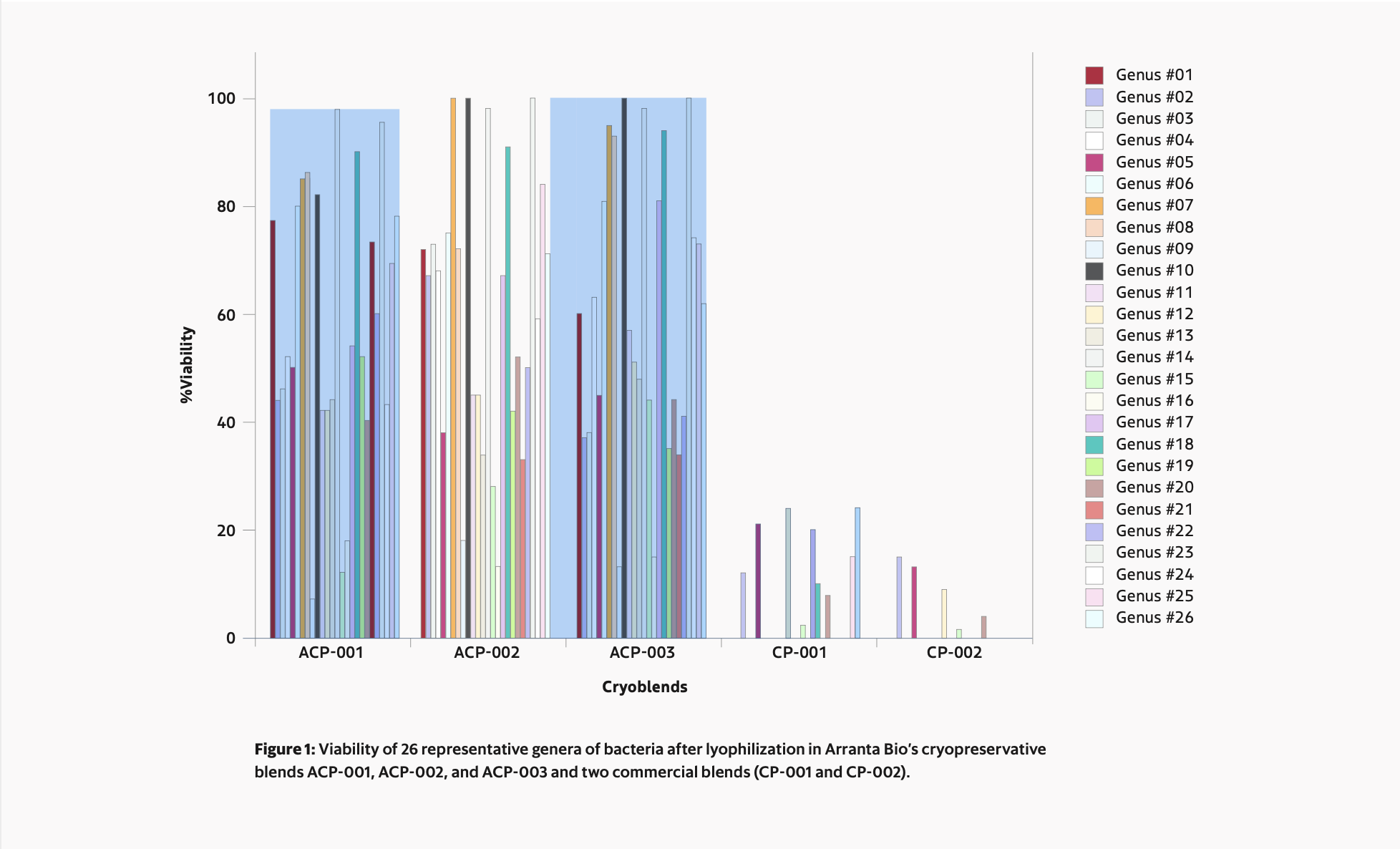 There clearly remains an unmet need for cryo- preservative compositions that maintain the viability of microorganisms during manufacturing, storage, and administration and that facilitate the timely recovery of organisms following administration to ensure delivery of the therapeutic effect in targeted organs.

Arranta Bio has been focused on develop- ing manufacturing processes for LBPs over more than 10 years, including production and lyophilization of more than 145 species of organisms covering 90 genera. As a result of this experience and accumulated knowledge base, Arranta has discovered a total of 16 proprietary preservative compositions

(Arranta CryoPreservatives, ACPs™) and preservation approaches that facilitate superior long-term viability, stability, and growth recovery over the commercially available or traditionally used options. Today, the ACPs are being used by Arranta Bio for client LBP process development and clinical manufacturing programs. Client LBPs are rapidly screened using the ACPs and preservation approaches in a high-throughput (HTP) approach using HTP viability assays to rapidly identify a formulation as part of a program to define a scalable cGMP-appropriate manufacturing process. 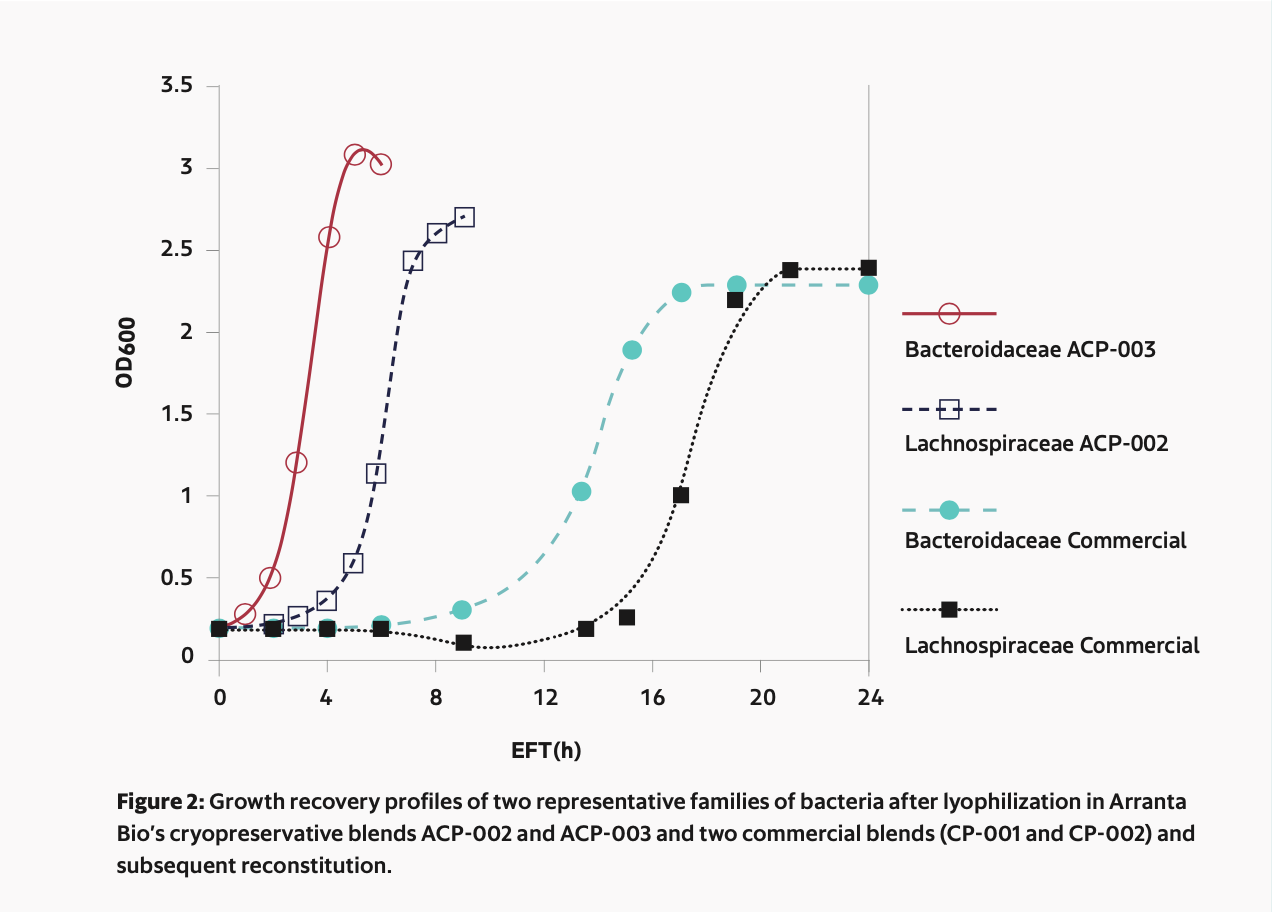 The ability of the ACP blends to improve the viability of freeze-dried LBP formulations was demonstrated by comparing the performance of three representative ACP compositions (ACP-001, ACP-002, and ACP- 003) against two commercial and commonly available cryopreservative compositions (CP-001 and CP-002, OPS Diagnostics products  LR2X-500-02  and  MFDB-500-06, respectively). Over 140 bacterial species representing greater than 90 different genera were cultured and lyophilized in the ACP formulations, and a smaller subset was compared to commercially available cryopreservatives. Viable and total cell count were measured using  Molecular  Probes’  LIVE/ DEAD® BacLight™  Bacterial  Viability  Kit. For the various bacterial species examined, the viability of the strains preserved in ACP formulations was superior (by an average of 3-fold) to that achieved using the two commercially available blends (Figure 1). 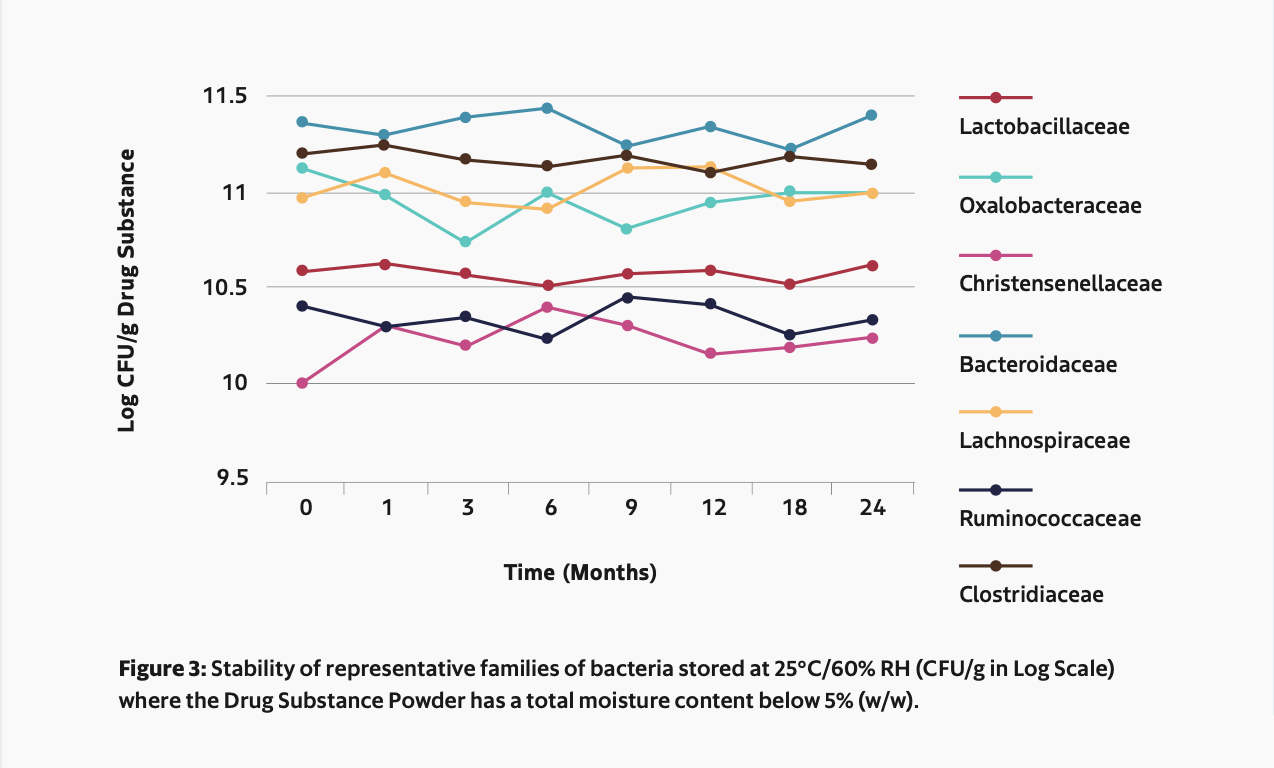 Growth recovery was also evaluated for two representative organisms, Bacteroidaceae and Lachnospiraceae, in the high- est-performing ACPs (ACP-003 and  ACP- 002, respectively) and compared against commercially available cryopreservative compositions (OPS Diagnostics Cat. No. LR2X-500-02   and   MFDB-500-06). The strains were grown, harvested, resuspended in cryopreservative, and lyophilized. Resultant freeze-dried powders were subsequently rehydrated in media and cultured. Optical densities (OD600) were monitored during culture and growth curves generated over 24 hours to determine growth recovery profiles for each organism. The time to recovery (lag phase) was measured and found to be longer (2–14 hours) for the organisms when freeze-dried in the commercial cryo- preservatives (see Figure 2), while lag phase, when formulated in ACPs, was comparable to unlyophilized strains grown from a cell bank (data not shown).

Stability was then evaluated to determine whether ACP compositions could support viability over multiple freeze-thaw cycles. Species representing four bacterial families were cultured and then lyophilized in their highest-performing ACP formulation. Resultant freeze-dried powders were then portioned and packaged in polyethylene bags, placed inside foil-laminated pouches along with a desiccant pouch, sealed, and then stored under various stability conditions. Freeze-thaw stability was evaluated by subjecting the lyophilized microorganisms to four freeze-thaw cycles (each cycle consisting of storage for 12–24 hours at –20 ± 5 °C followed by storage for six (6) hours at 22 °C). Appearance, viability, and moisture content were tested after each thaw. Results were consistent across all four (4) cycles, showing no appreciable loss of viability or changes in appearance or moisture for all four species evaluated (data not shown). Similarly consistent results were achieved after four (4) freeze cycles of –20 ± 5 °C to –80 °C. 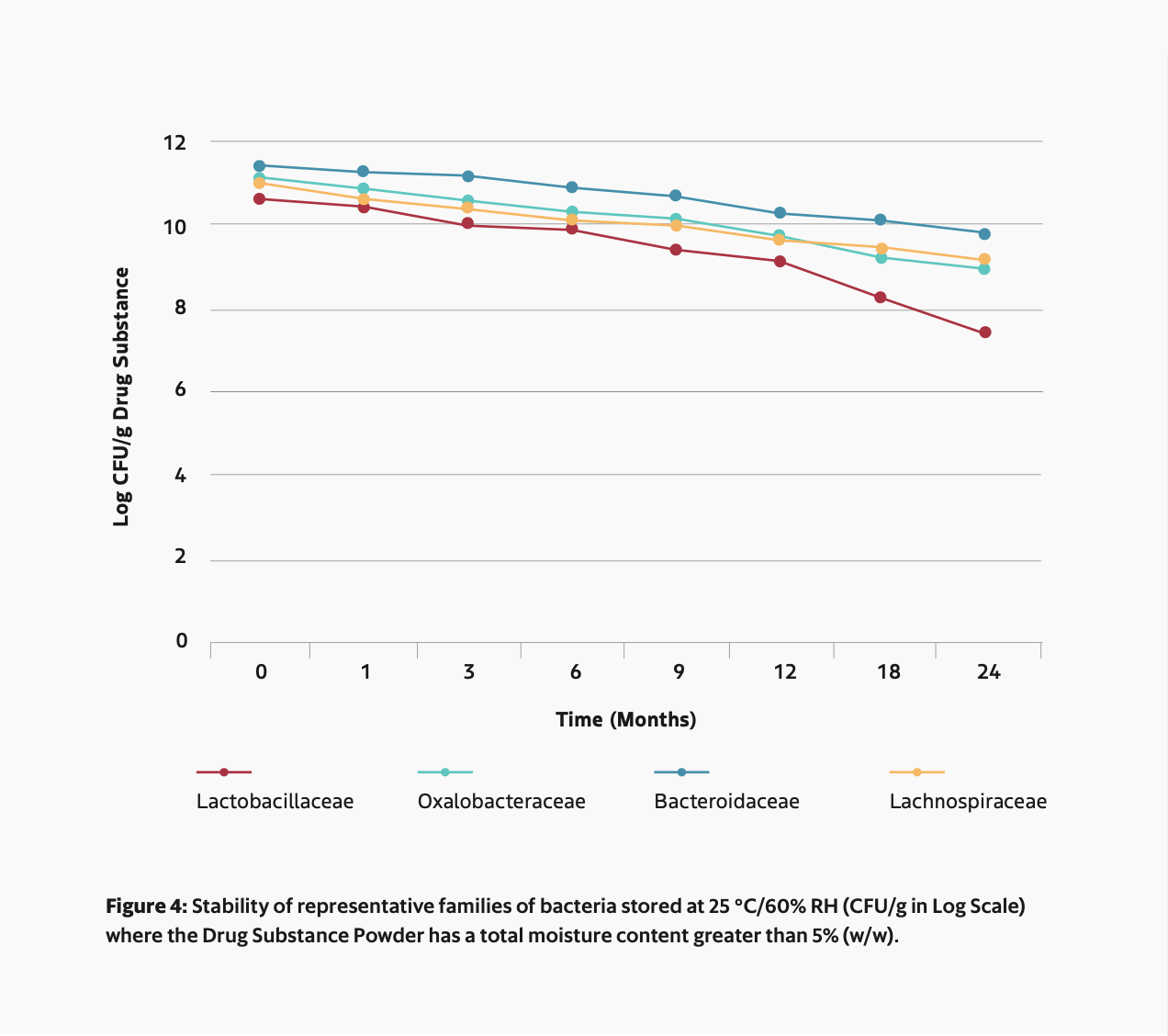 Long-term 24-month stability was also investigated to ensure that potency can be maintained using ACP  formulations.  For this study, bacterial species representing seven (7) different families were cultured and lyophilized in the best-performing ACP formulation for each species. Lyophilized powders having <5% moisture were packaged in polyethylene bags and foil-laminated pouches to be representative of bulk drug substance (DS). Each DS was then stored for various timepoints under long-term (2–8 °C) and accelerated (25 °C) conditions before being evaluated for potency (CFU/g). Potency results remained consistent across all timepoints measured (1,3, 6, 9, 12, 18, and 24 months) for all species under both temperature conditions (Figure 3). Initial moisture content, however, appeared to be important for stability, since DS from at least four (4) of the bacterial species having 5–8% moisture experienced some losses in potency at 1 month and 1.5 logs to over 3 logs loss in potency by 24 months when stored at 25 °C (Figure 4). Notably, the change in absolute moisture content suggests that the initial moisture level is a CQA and that the processing environment is a critical process parameter (CPP) that must be controlled during manufacture. Interestingly, however, exposure of DS to atmospheric levels of oxygen at 22 °C for up to seven (7) days did not appear to impact stability (appearance, water content, or viability), although longer durations were not examined (data not shown).

The impact of moisture on viability in the ACP formulations was further examined. Each of the four (4) lyophilized species was subjected to increasing levels of humidity ranging from 19% to 59% for up to 24 hours. Appearance, moisture content, and viability were evaluated at four (4) different time- points. The DS experienced a corresponding loss in viability with increased humidity and duration, which correlated with an increased moisture content (and a corresponding shift from free-flowing powder to cake-like appearance; data not shown).

The results of the studies performed indicate that Arranta ACP formulations can support superior viability and growth recovery over current commercial options for many LBPs, and that DS batches produced using the ACPs may remain viable and potent for up to two years. Higher viabilities can facilitate reductions in manufacturing scales and/or number of batches, which in turn can lead to lower COGS. Combining the right cryopreservatives with cGMP manufacturing facilities that are designed to meet the specific production requirements for these organisms, including control of moisture and oxygen levels, are important considerations for development of LBPs as pharmaceuticals.